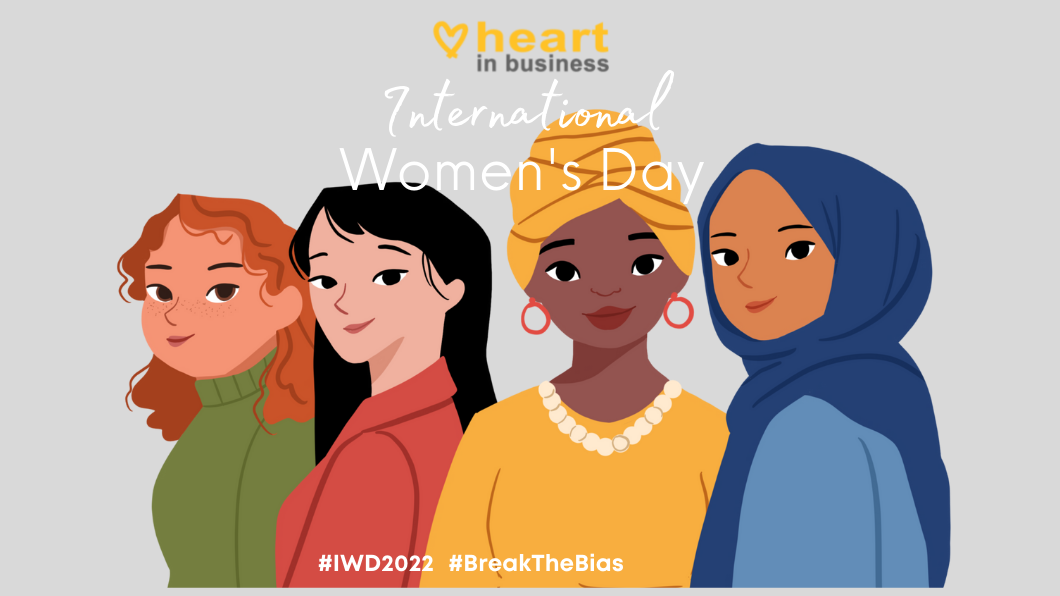 Today is International Women’s Day. One day a year where the world stops for a moment to look at how women are represented in society. This year’s theme is: Breaking the Bias.

How can women be equal and have a fair chance in the world when so much is stacked against them?

In Andrew and my book, ‘Putting the Heart back into Business’ I say the following on money: having experienced a period in my life when I was a single parent on benefits, with no secure housing and without the ability to earn money because I was caring for an 18-month-old child. I know what it’s like to feel terrified about where the next £5 would come from.

Now I see that, like so many things, money will continue to remain unequal in a society that doesn’t include or properly count women and ethnic minorities.

In his book, The Uncounted, Alex Cobham wrote about these damaging inequalities; and in her book Invisible Women, Caroline Criado Perez wrote about the gender data gap that exists in society. This absence of data means that officially, legally and politically the uncounted don’t exist. Ethnic minorities and women most often fall into the poorest bracket of society, so they are the most disenfranchised.

However, evidence shows that when the invisible and uncounted are represented it saves society, governments and business money. Poor quality and missing data is impacting us all in far greater ways than we can imagine. We as a society have a choice to change this bias and save money at the same time.

I recently met up with a friend who spent the first 30 minutes of our conversation talking about his decision on whether or not to have a Covid vaccine. It dawned on me that he didn’t want to hear my opinion. When he did stop speaking, I surprised myself by saying: “You can have whatever opinion you want and make whatever choice you want because you’re a single white man with no dependants and a very good job. You have the privilege of choice.”

The next day I turned on the radio to listen to the 75th anniversary edition of BBC Radio 4’s Woman’s Hour, where women were being invited to phone in and discuss their feelings about equality in 2021. The callers were very clear that until both parents take 100 per cent shared responsibility for the childcare and cost of their children that there won’t be true equality. I thought about my own situation, bringing up my daughter for many years as a single parent, without support from my family. In 11 of the 12 years of her life I have earned more than her father and have always done the largest percentage of the childcare. How can we achieve equality between men and women if women are still doing most of the housework and childcare? We live in a world where there are more and more separated families that are also separated from the support of the extended family such as grandparents, aunts and uncles. Caroline Criado Perez has done a lot of research that shows women often don’t even appear in data and their differences and circumstances aren’t even considered. Without accurate data we can’t even begin to discuss equality – not just gender equality but also race equality.

The work my colleague Andrew and I did at the Thornton’s Budgens Supermarket in Belsize Park, London was groundbreaking.

There is a proportionally high number of single mothers working in the store. Thornton’s Budgens is a supermarket, and yet we invested in its people. The result was that the team grew closer and national and religious divisions were broken down. I am reminded of what Sadia shared about her mother, who arrived in the UK as a single mother, not believing she had the qualifications to work in a supermarket. Andrew took the time to train Sadia’s mother and build her self-confidence. Not only has she continued to work for Thornton’s Budgens for many years, but she also encouraged her children, sister and other family members to work there too. This investment in people has led to Thornton’s Budgens having loyal and long-standing team members.

This type of investment and trust has created more than a team – it has created a family. This has been even more relevant during the Covid pandemic, when most of the team were not able to travel home to visit their families. They knew they had the support of their Thornton’s Budgens family. Andrew says: ‘What I want everyone to experience is that, by facing our blocks and reconnecting with our individual purpose and what we love doing, we discover that there are so many more paths in front of us than we could have imagined’.

Discover the Purpose in Everyone

Our Mission is to equip leaders to discover the purpose in everyone, to inspire the company to honour its reason for being, so that everyone can be in flow through unknotting and live at their full potential. The Stepping into Authentic Leadership programmes are a key part of achieving this. We act as advisors to business leaders and boards, we facilitate team workshops and open training programmes. We coach business leaders, and help companies measure and track how much of their human potential they are accessing. We do this through our global team of specialist facilitators and coaches.

More about our work

Take a moment for yourself

In Heart in Business we work with individuals and companies to help them discover their purpose, their direction. What is it that gets you up in the morning? Where do you want to be on 21 January 2023 as one lunar year ends and another begins?

Happiness is defined by having a clear purpose and doing what you love doing. How will you create a prosperous year that brings you happiness?

We would love to connect & hear from you